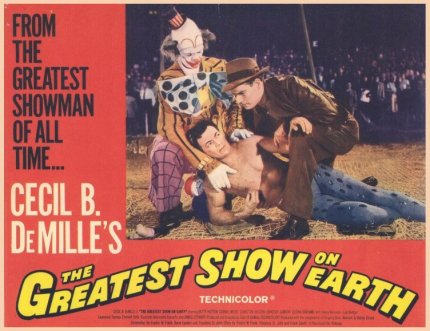 This is the least ridiculous poster I could find.  Think about that.

In 1952 director Fred Zinneman took a magazine story called “The Tin Star,” teamed together with a mostly uncredited cinematographer, and shot a deceptively beautiful genre bending western about a quiet man who chooses to walk the lonely road of doing what is right, rather than what is easy.

High Noon did not win the Academy Award in 1952.

It’s something I struggle with now, but High Noon was far, far off my radar, as were the Academy Awards.  When I was 5 I thought I would grow up to be a trapeze artist and The Greastest Show on Earth is why.  If someone had told little me that important people had gotten together in Hollywood and decided this movie was better than all the others?  Hell yes, it was!  Human drama, people, human drama!

This film is so, so soapy.  In fact, it’s surprising that they had time for such hand-wringing, eye-rolling drama given that the entire film is basically one long product placement ad for Ringling Bros. Barnum and Bailey circus.  It’s surprising the main actors were given time for such drama considering the film is full of Hollywood cameos… everyone from Bob Hope to Lawrence Tierney is here.

You’ll thank me for the time you spend watching this SEVEN MINUTE trailer.

The plot, oh, the plot!  Main plots and subplots and threads of humor and suspense thrown in just because this is Cecile B. De Mille and bythewaythisisallinTechnicolor!  So let’s talk about what is going on here.

Brad (Charlton Heston) runs a circus with an iron fist and no time for trivial things like emotions, interpersonal relationships, or hobbies.  Brad’s loved by two women: trapeze artist Holly (Betty Hutton) and elephant stuntwoman Angel (Gloria Grahame).  Dare I say the love triangle is turned into a three ring circus by the arrival of hypersexual trapeze master The Great Sebastian (Cornel Wilde)?  Oh there’s a few other trifling details: everyone’s job is on the line as the circus on the verge of bankruptcy, Angel is in a relationship with psychopath elephant trainer Klaus (Lyle Bettger), there’s a crooked carney running games, Sebastian is disfigured in a trapeze accident, Buttons the clown (Jimmy Stewart) can never take off his makeup because he’s actually a doctor hiding from police for mercy-killing his wife, and oh, the circus train derails and almost kills Brad.

This is why I grew up hating Cornel Wilde.  I couldn’t get this out of my head.

There are so many unintentionally hilarious things about this movie.  Take, for instance, the above screen cap.  Sebastian has just fallen from his trapeze and landed on the net he cut down in a fit of foreshadowing before his act.  Though his hand will be mangled into a pale claw and he’s probably suffering from fractured ribs and at least one collapsed lung, he staggers out of the ring with the bloody imprint of said net on his chest.  Try not to laugh.  Be awed and wonder who thought to include that tiny gem in a film so epic that it redefined scale.

Should my upper-body strength fail to develop by the time I reached adulthood, I felt sure I could secure a circus job like Dorothy Lamour’s gum-chewing Phyllis.  Phyillis’s character is sadly neglected in the film, mostly relegated to singing, riding around on a circus float as the Moon Goddess and making allusions to her main act: holding up her own weight by a mouth apparatus and spinning around.  My sister and I argued for years on whether this leather strap she put in her mouth was called the “Air & Jaw” (me) or “Iron Jaw” (her) mouthpiece.  I finally gave in in adulthood, but I still think Air & Jaw is a viable name.

Did I mention Klaus and the crooked carny plan a great train robbery, inadvertently causing the circus train to crash and the near exsanguination of Brad?  Well they do, and The Great Sebastian saves Brad’s life with a Johnny on the Spot blood transfusion performed by Buttons the clown, thereby putting him in danger of being caught by the FBI man hitching a ride on the circus train.  What.  It could happen.  Which brings me to my next point…

The dialogue in here is simultaneously the best and worst thing to ever happen.  Sebastian to Holly while he’s giving Brad blood: “If he should make love well after this, pay no attention.  It will be me.”  Ultimately, Brad does choose Holly and one must wonder if Holly thereby got the best of both worlds – Sebastian’s lovemaking stamina in a Charlton Heston vessel.  I’m surprised no one has thus far latched on to Sebastian’s practice of comparing women to different types of alcohol.  It’s pretty smooth…  Angel? “Like cognac… all fire in the glass!”  Holly? “You are like champagne; you make my head spin.” 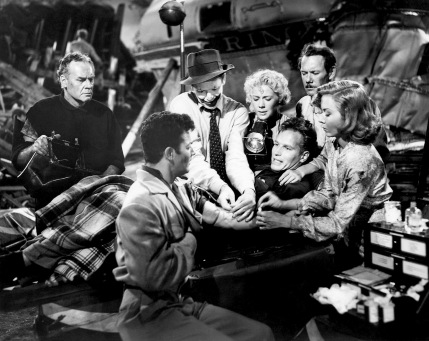 Here’s a fun game.  Drink whenever someone accuses Brad Braden of having sawdust in his veins.

If, up until this point, I have failed to mention that this film could also be classified as a MUSICAL, it is only because I think we should all take a step back and think about what I have said until this point.  Mercy killing clowns.  Cornel Wilde in aqua trapeze tights.  A man choosing Betty Hutton over Gloria Grahame.  Now add what can only be referred to as “spectacles” of song.

Clearly we have moved beyond the pale, here.

I now love and appreciate High Noon just as much as my five-year-old self loved The Greatest Show on Earth but I would be hard pressed to say which film I quote more often.